More work on the Working Kitchen

I can't believe it's been five months since I last posted about this property.   I feel I've been working on it for ages - to the detriment of my other projects but I'm back again with an update for you.

Firstly, to answer a couple of questions asked regarding the last post -

Daydreamer - there's nothing said about the central part of the kitchen floor.   I just have to assume that perhaps when the present day owners were making it all safe that maybe work was carried out and rather than replace it with slabs, they put in wood to keep an overall feel for the period (and to make it easier to get back in if needs be).

Sheila - The bread oven.   After much searching the RL house I came across the lid of an aerosol (spot carpet cleaner to be exact!) 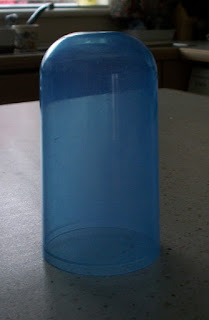 I already had the door so firstly, I added a base, primed it and painted it black, bent the door to fit the curve and then cut a small space at the bottom which I filled with some stones I already had.

It now looks like this.  I was really pleased as I'm not usually that lucky in finding "the right thing to do the job"!   It saved me a lot of bother.

So, on to progress.

I have scoured hundreds of pictures to get the detail of these rooms correct as there is so much stuff in the room and I am continually finding other items I hadn't seen before so of course, that's another mini order.   Blue and white china is at the top of my list as an awful lot of it appears in every room of this property. 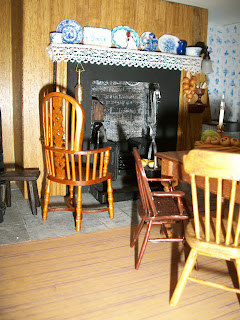 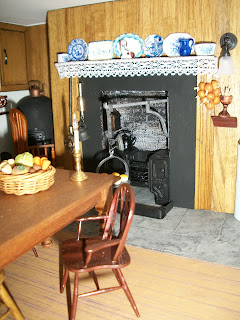 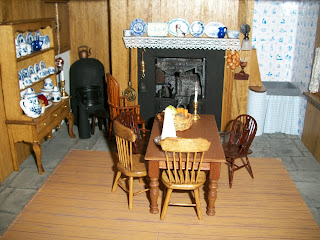 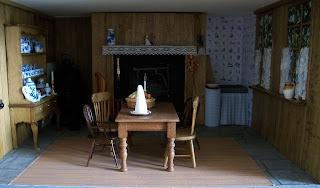 In a lot of photos of the RL property, the spaces are dark and it's sometimes difficult to see what's going on in the corners - the wall cupboard to the left is one of those tricky spaces.   I initially thought I could see a cupboard there but after searching further pictures I don't think it is a cupboard but hey ho, it's a cupboard in my space! 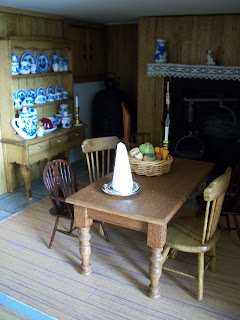 Since I took the decision to remove the staircase from the property (with the exception of the stairs to the attic space) I couldn't really see the house as a normal house would be seen, ie. rooms leading to rooms in a logical manner so I took the decision to have it viewed "front on" as shown in Ben Rea's* painting.   Each room being viewed on its own and that is why there are windows on the right with an outside view.    It wouldn't work if I showed it alongside the picture of the crumbly kitchen next door.  As said previously, I've swapped the kitchens around as you wouldn't enter a Courtyard from a crumbly kitchen! 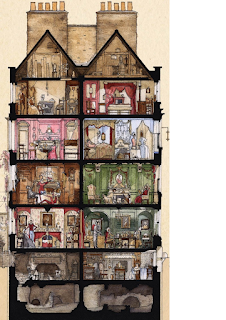 *With thanks to Ben Rea for permission to use his work

The little string of figures above the range are gingerbread men.   Created by painting and linking together sections of paper cutout figures purchased from MiniMcGregor 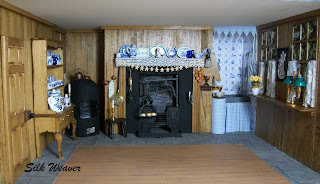 The Delft tiling surrounding the sink area is a tile printie and the plumbing was created using a piece of solder and forming it into the shape required, adding a tap and attaching it all to a correctly sized piece of "glazing".    The whole panel was then stuck in place. 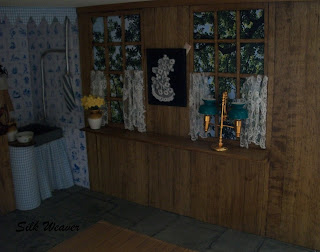 This is the Working Kitchen* I am replicating and there are still a few bits to be included but it's almost there.   There are variations in the pictures I am using for reference and if I can, I'll show some in another post. 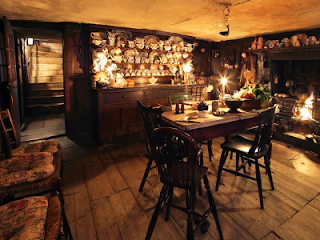 *With thanks to the Dennis Sever House for their permission to use the above photo. 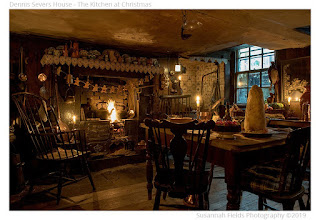 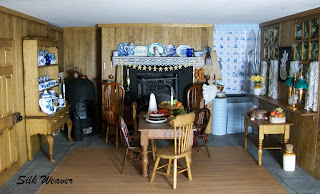 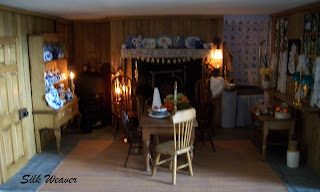 ** Susannah Fields very kindly gave me permission to use that particular photograph which is one of a collection taken at the Dennis Sever house.   You can see more of her DS work here https://susannahfields.co.uk/2015/02/25/dennis-severs-house-a-wonderful-step-back-in-time/ and here https://susannahfields.co.uk/2016/12/20/dennis-severs-house-at-christmas-interior-photography/.    They may give you a better idea of what I'm trying to achieve with my own mini version. 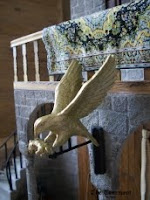